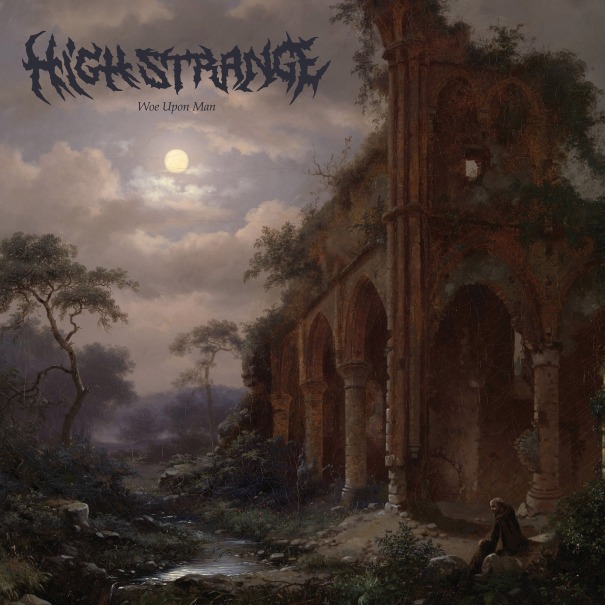 Here is my design for a music project I was part of. The cover painting is “Monk Meditating near a Ruin by Moonlight” by Frederik Marinus Kruseman, 1862. I chose it because all the lyrics are based on “A Dream Play” by August Strindberg. It is a thematically appropriate painting that was made during the author’s lifetime. I like to think he saw this artwork with his own eyes. I also created the final band logo based on a hand-drawn design by Daniel Mirro.

Here is the back cover, followed by the outside and inside cassette J-Card designs. I edited the cassette text on the right from the lyrics as they would not fit. I felt those lines captured the most important idea of Strindberg’s play.

You can check out this album over on Bandcamp here.

This is four way split CD of experimental music released by Cipher Productions in Tasmania. I shot the D-SLR photos at a metal salvage business in my neighborhood. Click here to see a photo of the whole package. Click here for more info on this release.

This is a version of the latest album cover for the band Azar Swan. I photographed the images with a D-SLR off of a small analog TV screen.

You can listen to the album over here on bandcamp. 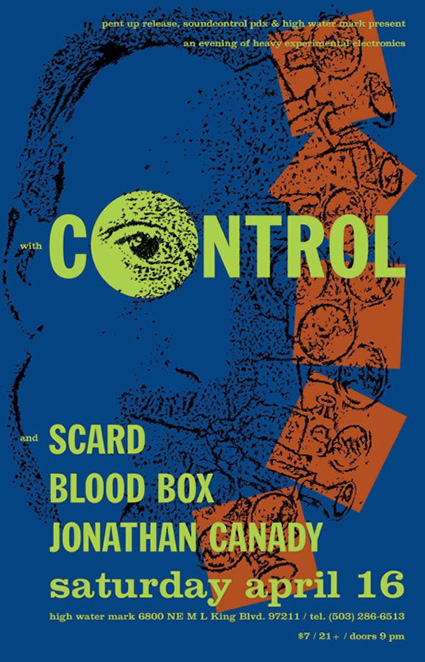 I was commissioned to do this poster by the promoter, in addition to being part of the lineup. I decided to use the opportunity to do a handmade illustration. The black line work is my own original pencil drawing of Italian Futurist artist Luigi Russolo (1885 – 1947) surrounded by his creations.

I have been doing all the design work for this Chicago based experimental post-rock group since their debut release in 2011. This includes their latest CD and LP on Relapse Records (released in late 2014 – click here for more info).

I chose this EP to show you as I had more of a creative hand in the design and digital illustration. The image you see is the cover die cut showing through to the insert illustration (click here to see full image). Black and white space photography was used on the debut Anatomy of Habit release so this seemed like a good progression. The image is made up of layers of satellite photos of city lights at night formed into an Abstract Expressionist-inspired motif using Photoshop. This was also a nod to the “Star Gate Sequence” in Kubrick’s “2001: A Space Odyssey.” The rest of the layout was created in InDesign except the die cut which was made in Adobe Illustrator.

You can see my other designs for Anatomy of Habit over here at discogs.com

I have been online friends with Jake from this Welsh post-punk band for a few years. He’s a fan of my visual art so he asked to use this handmade watercolor drawing of mine for the cover. I also handled the InDesign layout and prepress.

Damone was a rock band from the Boston area that was briefly on Island Records. I was recommended to them by a former happy client. After some work the band and I settled on this optical illusion based image for the cover. Getting to the finished product involved hand drawn sketches that were then re-created in Adobe Illustrator and finalized as a complex multi-layered Photoshop file.

Here’s my logo design for Australian metal group d.USK. They are now known as Inverloch (also on Relapse Records). The band had done a very rough version of the logo that I expanded upon. I wanted to make sure it was vector art but also looked textural. I scanned some beaten up screen print off of a cardboard box and kept the most interesting looking “cracks.” This was done using an image from Photoshop that was converted into paths and combined with the moon shape / text in Illustrator.

This logo was used for a full size stage banner and shirt design.

I am also a musician in my spare time and this was one of my own limited edition tape releases. I pushed myself to do something very colorful and psychedelic. The central image is an open shutter photo of me performing that I radically color shifted in Photoshop. Then I sampled the three colors used in the rest of the InDesign layout from that. You can see the full insert spread here.

Zombi’s album “Cosmos” was originally released on Relapse Records in 2003 on CD only. The artwork was all done by band member Steve Moore. In 2008 I was asked to make that design into a gatefold LP. I didn’t want to corrupt Steve’s design but I am a big fan of this album so I added a few of my own touches. The image above is a close-up of the middle of the gatefold design I came up with using Photoshop. You can see the full gatefold spread here. I also added a zodiac chart to the back cover and all new center label designs. The rest of the layout was done using QuarkXPress.

Most of my work from my Relapse Records days was quite confrontational because of the aggressive nature of the bands. This experimental music compilation was an opportunity to do something with a softer more sophisticated look. The photo was colorized and the white text / shape was made into a bitmap overlay in Photoshop. The package design was completed in QuarkXPress.